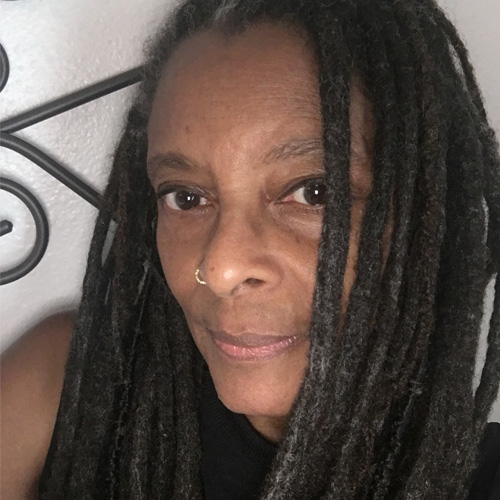 Ninoska M’bewe Escobar is an artist-scholar and Postdoctoral Fellow in Dance. Her work investigates how bodies carry history and memory and how cultural heritage and social experiences shape identities and artistic practices. She was a principal dancer in the companies of legendary Brazilian capoeiristas Loremil Machado and Jelon Vieira, Newark Dance Theatre, and the Caribbean American Dance Company, among others, and performed with Nigerian Jùjú music trailblazer King Sunny Adé, with Le Ballet National Djoliba, and with Jamaican reggae superstars Third World during their 1980s tours of the U.S. She performed in the original cast of Fame (1980), in the Brooklyn Academy of Music production of Njinga The Queen King (1993), and in numerous concert stage productions and venues including Lincoln Center for the Performing Arts, Jacob’s Pillow, and the Santa Fe Dance Festival. As a choreographer, she created the dances for Reza Abdoh’s The Law of Remains (1992) and the Nuyorican Poets Café production of Pepe Carril’s Shango de Ima (1994), which won an Audelco award for Outstanding Black Theater Choreography. As a director, she created original works performed at the Joyce Soho, the Theater of the Riverside Church, the Neuberger Museum of Art, and The Knitting Factory in New York, among others. She is a former faculty and administrator at The Ailey School and Alvin Ailey Dance Foundation in New York, where she co-directed the Pre-Professional Performing Arts School Program and directed AileyCamp in New York and Miami. She is a former lead national facilitator of the humanities curriculum Revelations: An Interdisciplinary Approach, which utilizes Ailey’s signature ballet Revelations to engage educators and students in examining societal issues impacting their lives and communities.

Dr. Escobar’s research and teaching centers the contributions of Black diasporic and artists of color to American arts, history and social politics, with specific emphasis on history and memory as they are revealed through expressive forms and performance practices. Her interdisciplinary approach to theatre, dance and performance history and theory deploys an intersectional perspective in examining social-political and artistic movements and ideologies and understanding cultural production in the contexts of social formation and social change. Her postdoctoral project investigates the work and legacy of the Caribbean-American choreographer-anthropologist-social activist Pearl Primus (1919-1994), an iconic but underappreciated figure in the history of American dance. She examines the recent reemergence of Michael Row The Boat Ashore (1979), created by Primus in response to the 1963 bombing of the Sixteenth Baptist Church in Birmingham, Alabama. Drawing on pertinent historical records, interviews with key sources and archival research, Dr. Escobar has documented the reconstruction of this historically significant but rarely seen work by the regisseur Paul Dennis, former member of the Limón Dance Company, and explores the work’s relevance to the current moment of socially and politically focused public discourse and performance. Her essay on this work is under review for publication in The Journal of American Culture special issue, Dance and the Black Body. In the next phase of Dr. Escobar’s fellowship, she will prepare material for the publication of a monograph on Primus’s work and legacy in which she updates Primus’s creative history, argues for Primus’s value in the contexts of her politics, feminism and relevance to the contemporary moment of artist-led actions for anti-racist justice and democracy in the United States, and resituates Primus in American dance and cultural history through her impact on later innovators including Donald McKayle, Alvin Ailey, and Jawole Willa Jo Zollar, among others.