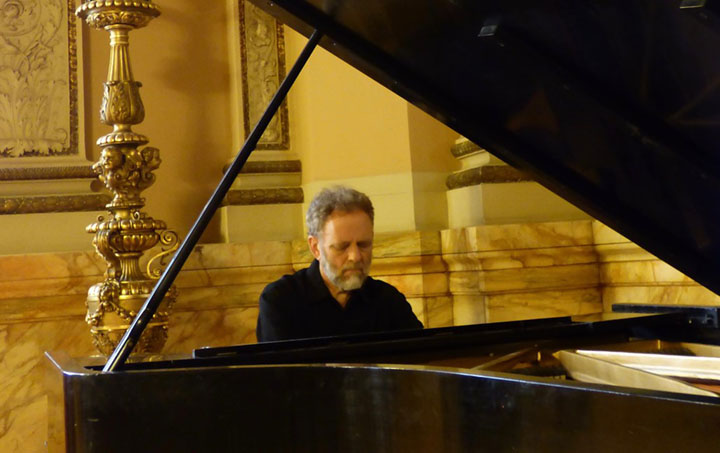 The concert will feature the world premiere of Mario Carro’s Incertidumbre (Uncertainty, 2022), a piece inspired by a two-week retreat that brought together scientists and artists of several disciplines. The title refers to Heisenberg’s “uncertainty principle,” and is mirrored in music as a juxtaposition of tonality and atonality, the consonance of triads and the chaos of twelve-tone rows. Other pieces by Carro will include his Rio de Cristal (Crystal River, 2019) and Impromptu (2010).

Federico Ibarra taught Jorge Vidales in the late 1990s. Ibarra’s Sonata 3 (1988) will be paired with Vidales’ Estudios Intervállicos (1997), written while he was studying with Ibarra, and his more recent 12 Preludes for Piano (2015). Also on the program will be Heitor Villa-Lobos’ A Próle do Bebé (1918), a suite of eight pieces that describe children’s dolls, including the famous O Policinelo, the clown doll.

Fred Sturm makes his living as a piano technician to support his ability to explore, perform and record music that excites him. He has released six CDs, including Brazilian Soul (all Villa-Lobos) and Piano Music of Federico Ibarra. His latest project, not yet released, includes all the piano music of Mexican composer Arturo Márquez, together with recent works by Ibarra, Mario Carro and Alejandro Rutty.